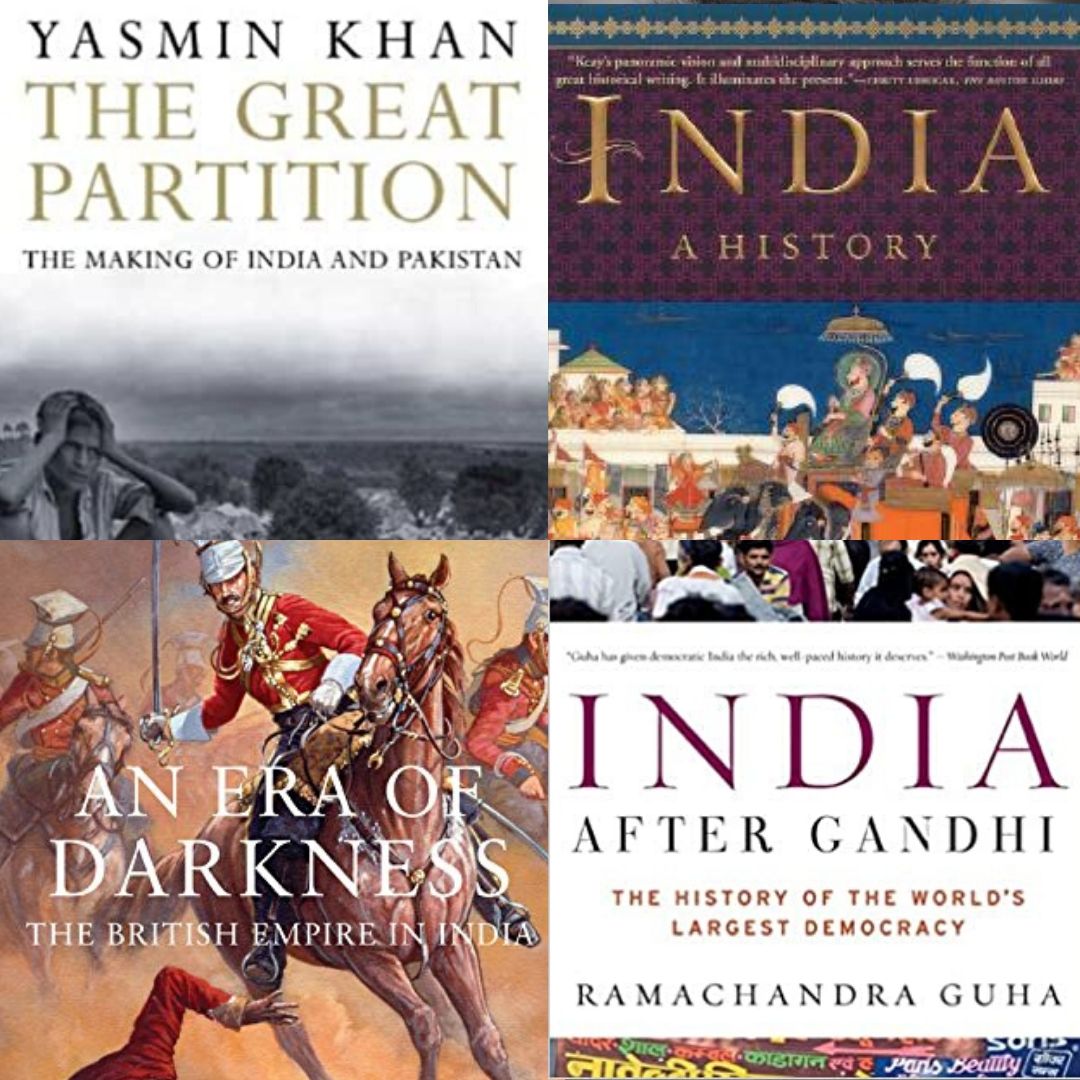 It is always worth reading the best books on Indian history because India is home to one of the most ancient civilizations in the world, traceable to the Indus Valley Civilization in 4,500 BC, a contemporary of the ancient civilizations of Egypt, Mesopotamia and China. In the thousands of years since the first inhabitants established settlements in India, there have been many great kings, famous dynasties, invasions, foreign rulers, and fights for independence; culminating in the world’s largest democracy as we know it today. The best books on Indian history talk about all these and much more.

India’s rich history has inspired countless books, but here is a list of 10 of the best books on India history:

1. The Discovery of India by Jawaharlal Nehru

Eminent freedom fighter and the first prime minister of India, Jawaharlal Nehru was a prolific writer as well, and during his imprisonment in 1942-46, he wrote ‘The Discovery of India’, a non-fictional account of Indian history, from ancient times to the last years of British Rule. Completed in 1944 but first published in 1946, ‘The Discovery of India’ follows the development of India from the time of the Indus Valley Civilisation and Vedic period through all of the socio-political changes that took place due to the numerous foreign invaders. Considered to be one of the best books on Indian History, ‘The Discovery of India’ provides an invaluable view of Indian history from the eyes of a freedom fighter himself.

2. India after Gandhi: The History of the World’s Largest Democracy by Ramachandra Guha

This one is undeniably one of the best books on Indian history. Among the best Indian history books is ‘India after Gandhi: The History of the World’s Largest Democracy’, winner of the Sahitya Akademi Award for English (2011) written by Indian historian Ramachandra Guha. The book is an exhaustive and enthralling account of the evolution of India after it gained independence from British Rule in 1947, tracing the conflicts and policies that have helped form the country into the world’s largest (and unlikely) democracy. With thorough research and elegant writing, India After Gandhi lingers between history and biography, describing the lives and actions of famous prime ministers such as Jawaharlal Nehru and Indira Gandhi. However, lesser-known Indians, the general populace including workers, women, peasants, musicians and tribals, and their contributions to the growth of the nation are not left out.

3. India: A History by John Keay

For an overall history of India, the ‘India: A History’ should be on your to-read list. With simple language and intense research the writer John Keay’s chronicle on Indian history spans 5 millenniums, beginning from the first Harrapan civilizations on the banks of the Indus Valley River to the recent nuclear arms race. Parts of ancient India, such as Bangladesh and Pakistan also form a part of the book.

‘India: A History’ is one of the best books on India history that includes stories of historical events and people that have influenced the transformation of India over the years. A form of narrative history, the book combines insights from a variety of scholarly fields to build together the story of India with its full diversity of myriad cultures, regions, religions and people.

4. The Wonder That Was India by A.L. Basham

5. The Idea of India by Sunil Khilnani

Considered to be an indispensable reading on the modern Indian state, ‘The Idea of India’ describes the economical as well as the political history of India in the years since the Partition. The book is a unique take on the paradoxes and complications that have revolved around the goal to reinvent one of the world’s most ancient civilizations, India after Independence from British rule in 1947. With an impeccable historical analysis, Khilnani in ‘The Idea of India’ compares India’s energy, unpredictability and versatility with the goal of the nation becoming a massive yet united and successful democracy. ‘The Idea of India’ strives to answer the question of the idea of nationhood in India.

6. An Era of Darkness: The British Empire in India by Shashi Tharoor

A famous politician and writer, Shashi Tharoor has written multiple non-fiction books on Indian history, but among the best books on India history there are a few that clearly stand out, such as ‘An Era of Darkness: The British Empire’. Published under the title of ‘Inglorious Empire: What the British Did to India’ internationally, ‘An Era of Darkness’ takes a strong look at the changes that took place in India during the two centuries of British rule. Filled with interesting facts, the book ‘An Era of Darkness’ gives a fresh (and ruthless) glance at the so-called imperial gifts given by Britain, the effects of colonialism and the overall impact of British rule on India’s legacy.

True to its name, ‘History Of Medieval India’ is devoted specifically to the 1,000 year period from the 8th to the 18th century AD, inscribing the sequence of events that took place across India, and the empires that ruled different parts of the country. One of the best Indian history books ‘History Of Medieval India’ tells of the series of invasions that took place during these 1,000 years, the changing cultures and political upheavals. Written by Satish Chandra, known as one of India’s most influential historians, the book explores contributions of each of the dynasties ruling the land, including the Marathas, Pandyas, Cholas, Rajputs, Mughals and even Turkish invaders and the factors leading to their respective downfalls.

8. The Great Partition – The Making of India and Pakistan by Yasmin Khan

The year 1947 marked the independence of India from British rule, but the independence came at a price – the Partition of British India into modern-day India and Pakistan, in one of the most horrific decolonization events of the 20th century.  A list of best books on India history cannot be complete without a book on the Partition, and so, ‘The Great Partition – The Making of India and Pakistan’ is a must-read. The book weaves together the true story of the Partition, including the context, the general obliviousness amongst the public of what it would entail, the violent execution and the aftermath which have had repercussions on politics and people on both sides of the border.

The struggle for independence from British rule is one of the most important parts of Indian history, and while it is covered during school studies, one of the best Indian history books on the topic is ‘India’s Struggle for Independence’. An in-depth and well-researched account of India’s fight for freedom from the revolt of 1857 to the final win of independence in 1947, ‘India’s Struggle for Independence’ covers each step of the journey and the most prominent freedom fighters whether Mangal Pandey, Mahatma Gandhi, Subhash Chandra Bose or Rani Laxmi Bai. The many paths attempted to secure India’s freedom, their size, impact and results are all narrated in this comprehensive book, capturing the evolution and passion for India’s independence struggle eloquently.

The Mughal empire has left an unforgettable legacy in Indian history, but even the grand Mughals met their downfall when the British rule began. One of the best Indian history books documenting the downfall of the Mughal empire and the beginning of British rule is ‘The Last Mughal: The Fall of a Dynasty: Delhi, 1857’ which recalls the unfolding of events in the first war against the British in 1857 that marked the end of the Mughal rule. Penned by award-winning historian William Dalrymple, the book follows the story of the last Mughal emperor of India – Bahadur Shah Zafar II, the culturally diverse society of his court, his fight to retain control and his ultimate loss of power.

The ancient and vibrant history of India has been recorded in countless books over the years, so what are you waiting for? Start reading, because history can also be interesting. And of course, you always have the collection of best books by Indian authors in other all genres as well.

Best Books, Books, India after Gandhi, Indian History, The discovery of India, the wonder that was India
Next
8 Ultimate Benefits of Reading Books

Books on pandemics and epidemics you just can’t miss out!

10 Best Books By Indian Authors Ever