Did you know that Manjiri Prabhu has been recognized as one of the 50 inspiring women of Maharashtra? Moreover, Manjiri Prabhu is not just a novelist but also the director of numerous TV programs and also the founder of a Literary Festival. There is absolutely nothing that she can’t do. She is truly versatile and gives her best in everything that she does! She’s one of the first Indian female writers of mystery fiction to have her books published outside India. Her writing is so profound that she has been referred to as a “match for Dan Brown” by Shashi Tharoor. Prabhu continues to win the hearts of readers all across the world and be an inspiration to many!

We have compiled some of the best books by Manjiri Prabhu here to help you understand the mastery of her writing!

The story revolves around Sonia Samarth, a smart and intelligent woman from Pune who goes to open her detective agency known as Stellar Investigations. She uses her knowledge of Astrological Sciences to solve cases and find the suspect. For the first time, we have seen something like this that involves our protagonist to solve crimes by using Hindu Astronomy as their prime weapon. The concept is fresh and unique and deserves your attention.

Further in the story, we see that the book is composed of not just one story but several different short stories with a different set of victims and criminals. Sonia’s approach to all the cases is truly remarkable which will leave you asking for more. This is one of the best books by Manjiri Prabhu and has received several accolades for the same. If you love Sherlock Holmes or just crime fiction in general, this book should be on your reading list! 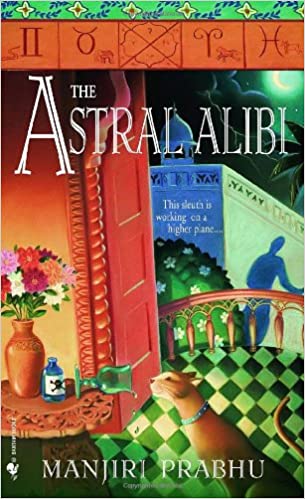 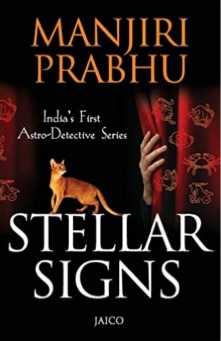 This is another book in the Stellar Investigation series. As we know, our protagonist uses old-age knowledge of Hindu Astronomy to solve complex crimes and find the culprit. In this book, we see that her detective agency has gained quite a lot of popularity in Pune and people from all over the country approach her to solve their cases. In the series of events that follow, Sonia Samarth solves the case of an arranged marriage that includes murderous in-laws, the not so dramatic murder act by a theatrical company, and so on.

The characterization is vivid and we get to witness a lot of Indianness in this book with mention of different traditions, rituals, and food prevalent in India. The study of horoscopes of the victims and people associated with them remains a unique and fresh concept that is sure to enthrall the readers.

Next in our list of best books by Manjiri Prabhu is The Cavansite Conspiracy that takes into account the life of the protagonist, Koyal Karnik who arrives at Pune to attend the wedding of her friend, Jasraj who happens to be a gemstone collector. She also meets her ex-boyfriend Neel at the same wedding. But moments later her world is turned upside down when Jasraj is found dead. The theft of the precious mineral Cavansite is also reported from the Museum of Pune.

Following a journey from Hamburg to Pune to London, we see Koyal seeking the truth and trying to unravel the murder mystery of her friend Jasraj with Neel by his side. The book is fast-paced, thrilling, and keeps you hooked till the very end. The writing style is simple and is sure to appeal to you.

The Trail of Four

The Trail of Four is based on the life of an Indian French investigative journalist named Re Parker who has strange visions about unlikely things that may take place in the future. He is not able to do anything about it until now when he has a prenomination something going wrong in Salzburg. He takes the next flight to Salzburg and meets his hotelier friend, Dan. The other main characters include the police chief, Stephan, and historian Isabel. Together, they embark on a journey to solve what Reinhart left behind 70 years ago!

The narrative of the book is clear and crisp. The plot is so intriguing that you can pull an all-nighter just to finish this amazing book and know what happens at the very end! Not only does Prabhu stand out in her brilliant storytelling at it is fair to say that she is on par with Dan Brown here. The exquisite blend of historical mystery and crime makes this one of the best books by Manjiri Prabhu.

Voice of The Runes (When Souls Connect, But Vengeance Speaks)

Manjiri Prabhu brings back our favorite investigative journalist Re Parker in yet another thrilling read with Voice of The Runes. The story begins with Re being invited to his Alma Matter, Lund University since its celebrating its glorious 350 years. But things go south when he has a vision of an evil presence lurking around the corridors of the University which warns him of what lies ahead. With the death of a Professor out of nowhere and clues being left behind in rune language, everyone goes into a frenzy of fear while Re decided to get to the bottom of the truth.

With the clock ticking and only 36 hours to spare, Re has to stop the mishappenings as well as protect the heritage of the University that stands tall for 350 years. Will he be able to do so? To find out more, add this book to your reading list. The book commences with a nail-biting finish that will thoroughly get your adrenaline high!

In The Shadow of Inheritance: A Haunting Love Story

This is one of the most unique books in our list of best books by Manjiri Prabhu. This is probably the only addition to our list that primarily focuses on love and mystery equally making this an attractive yet mysterious read for all. The story is centered around the life of Tara who has a dark past with her father getting murdered. Her world turns upside down with the arrival of a mysterious and attractive stranger in the remote town of Adeli. Suddenly, she is crowned as the sole heiress to a grand mansion in Mahabaleshwar. But only if it were so easy!

Her ancestral house is full of dark and twisted secrets and has a past of its own. The people residing in the house and mysterious and unreliable and among them, one is the murderer of her father. Will Tara ever find the truth? This intriguing read will make you crave more!

This is the first book in the series of “The Super Dome Chronicles.” This is one of the latest addition to the list of best books by Manjiri Prabhu. This is a layered piece of Science Fiction combined with fantasy and is seen as a unique book going by the Indian diaspora. Books like these are hard to find, especially by Indian authors but Manjiri Prabhu proves them all wrong by magnificently drafting a Sci-Fi among all her other works of mystery fiction. The story is based on our protagonist named Zinna, a Lambren who is stuck in the world of Super Dome with her friends accompanying her.

They have a superpower that makes them develop as quickly in a year that a normal human does in 6.25 years. They have to oblige by the rule of termination once they reach 16 years of age. A rule that is imposed on them by the Altklugs. Who are they and what is their mission? As the story progresses, more mysteries unfold and it becomes excessively twisted. Read the book to enjoy a well-written story of fantasy, mystery, and science.

If you liked this blog, you will also enjoy reading the author interview of Manjiri Prabhu, here.

Next
Best Books by Paulo Coelho that you shouldn’t miss!

Best of John Green: The Master of Young Adult Fiction!

10 Travel Books That Will Satisfy Your Wanderlust!

The only Bond that every bookworm adores: Best Books by Ruskin Bond!

The Epitome of Warmth and Simplicity: Best Books by Sudha Murty